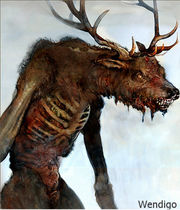 Your hero and heroine are hunting a Wendigo.

A Wendigo is a supernatural creature that was once human but has turned into an immortal evil spirit after consuming human flesh. “Wendigos are believed to live in the northern woods of Minnesota and in the north central regions of Canada . Kenora, Ontario, Canada, has been given the title of Wendigo Capital of the World by many. Sightings of the creature in this area have continued well into the new millennium.” (Source: http://www.supernaturalwiki.com/index.php?title=Wendigo_%28creature%29)

You can read more about the Wendigo at the above link and here – http://monster.wikia.com/wiki/Wendigo

Why are they hunting it? What’s at stake?

How did they meet?

For example, maybe your heroine was hired to capture it and your hero wants to kill it because it killed someone that he loved. They’re both after it but they have different objectives.